Former Bay City Roller Derek Longmuir has lost a bid to avoid a disciplinary hearing which could see him struck off the nursing register for life.The former nurse faces a hearing before the regulatory authority for nurses after he was convicted of possessing child pornography last year.

Longmuir's lawyer had argued that press coverage of the criminal case meant that his client would not be able to receive a fair hearing.

But it has been ruled that enough time has passed since that case, and that committee members will be able to disregard any knowledge they have of it.


Longmuir, 50, was sentenced to 300 hours' community service last March after admitting two counts of having indecent photographs, videos and computer discs at his home in Edinburgh.

The former drummer with the Scottish band also admitted making indecent photos of children at his home by downloading them from the internet.

He was sacked from his job as a nurse at Edinburgh Royal Infirmary shortly after the court case.

But because of his conviction he also faced a misconduct hearing before the Professional Conduct Committee of the UK Central Council for Nursing Midwifery and Health Visiting.

At a UKCC hearing last month Longmuir's lawyer Alun Thomas argued that press coverage of the pornography case meant that a fair hearing was impossible.

But this submission was rejected by a three-member UKCC panel at a hearing in Edinburgh on Monday.


After retiring for just over an hour, committee chairman Elizabeth Rush said: "The committee are not satisfied that Mr Longmuir would not be given a fair and impartial hearing because of the press coverage at the time of his court appearance. 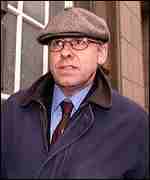 "There has been a considerable time lapse since these events and the committee that hears the case are professional, experienced individuals who will be given legal advice that if they did have sight of any press coverage, then that should be disregarded.

She said the case should be decided on "the evidence that is presented on the day".

She added: "Mr Longmuir or his representative will be given an opportunity to lead evidence on the circumstances leading up to the offences and any mitigating circumstances."

Longmuir's case will be considered by a different UKCC committee.

At his court case last year Longmuir had claimed that the indecent material belonged to an American friend.

Police found 22 pornographic videos and 40 computer discs with 117 images of indecent material, when they raided Longmuir's home in September 1998 following a tip-off.