About The Bay City Rollers

The Bay City Rollers were a Scottish pop group who rose to fame in the 70's. There were five members each hailing from humble beginnings in Edinburgh. The group was founded in 1966 in Edinburgh, Scotland by brothers Alan Longmuir and Derek Longmuir along with their schoolfriend and lead singer Gordon “Nobby” Clark. They were called The Saxons. At some stage, they decided to find a knew name for themselves. They got their name by randomly sticking a pin into a map of the United States. It stuck near the community of Bay City, Michigan. I thought Alan had said in an interview that the pin stuck in Michigan but they couldn't call the group 'The Michigan Rollers' so they simply picked somewhere in Michigan to name the group. I'm sure Alan said something like that! Anyway after changing their name they had a number of changes in membership before they hit the big time. There were many group (or band) changes in the early days. Members included John Devine, Dave Paton, later to become the lead singer of Pilot and Billy Lyall, also to become a member of Pilot. At some stage, guitarist Eric Faulkner joined. But the lead singer Nobby Clark grew tired of being in the group and decided to leave. The band were now without a lead singer. Eric Faulkner and someone else, (not quite sure who) had an idea. They went to see the lead singer in a group called 'Threshold. His name was Leslie Mckeown. They asked him to join The Rollers and he accepted. Some time after that, Stuart Wood was invited to join the group. And the rest is history!  The classic line-up during their heyday were guitarists Eric Faulkner and Stuart Wood, lead singer les Mckeown, bass guitarist Alan Longmuir and drummer Derek Longmuir.
The Bay City Rollers were managed from early on by Tam Paton, himself a former big band leader. Short term members from this period included David Paton (member 1969-1970) and Billy Lyall (member 1969-1971), who went on to be founding members of another successful Edinburgh band, Pilot.
After signing with Bell Records, the band’s first hit was “Keep on Dancing” (UK #9, 1971), a cover of a 1965 hit by The Gentrys, recorded at the suggestion of record producer Jonathan King. Clark was backed on vocals on “Keep on Dancing” by King doing multi tracked singing. Upon this release’s success, they made appearances on BBC One’s Top of the Pops. The group then won a Radio Luxembourg-sponsored song contest with the tune “Mañana”, which was later popular in parts of Europe and in Israel.
Several non-charting singles were released over the following two years. This period saw the addition of long term members Eric Faulkner and Stuart “Woody” Wood. In mid 1973 they narrowly missed the UK Singles Chart with the fourth single, “Saturday Night”, one of many songs written and produced for the band by the songwriting duo of Scotsman Bill Martin and Irishman Phil Coulter. By the end of 1973, Clark had become disillusioned by the band’s lack of success and decided to leave. He was replaced as lead singer by Les McKeown.
The five members at the end of 1973 – the Longmuir brothers, Faulkner, Wood and McKeown – are generally referred to as the “classic line-up”.[2] In early 1974 McKeown hastily re-recorded lead vocals of the group’s forthcoming single, “Remember (Sha La La La)”, which became a sizable hit and a lead-in to a series of UK chart hits.

Beginning with “Remember” (UK #6), the Rollers’ popularity exploded, and they released a string of hits on the UK chart. Following in succession were “Shang-a-Lang” (UK #2), “Summerlove Sensation” (UK #3), and “All of Me Loves All of You” (UK #4).
The British Hit Singles & Albums noted that they were "tartan teen sensations from Edinburgh" and were "the first of many acts heralded as the 'Biggest Group since The Beatles' and one of the most screamed-at teeny-bopper acts of the 1970s". (I would say not just one of the most screamed at of the 70's I'd say of all time!) For a relatively brief but fervent period they were worldwide teen idols. They caused hysteria and mayhem wherever they went (the media named this "Rollermania" and their concerts became somewhat of an event in themselves. 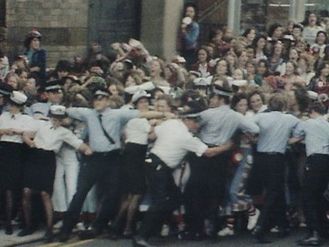 Rollermania in 1975! After waiting for hours outside for the Rollers as the fans chant and sing about the group there is an avalanche of emotion as the Rollers emerge! At the sight of the Rollers the fans begin desperately shouting out the names of their favourite, screaming and crying. Some are taken into an ambulance either through injury, being overcome with emotion, hysterical behaviour or fainting.
By early 1975, they were one of the highest-selling acts in the UK. That year saw a successful UK tour (which prompted newspaper headlines about “Rollermania”), and a 20-week UK television series, Shang-a-Lang.

A cover of the Four Seasons’ “Bye, Bye, Baby” stayed at #1 in the UK for six weeks in the spring of 1975, selling nearly a million copies to become the biggest seller of the year, and the subsequent single “Give a Little Love” topped the charts that summer, their second #1 hit. Two full-length LPs were produced during this period: Once Upon a Star and Wouldn’t You Like It?. Faulkner and Wood undertook the majority of the songwriting duties.

As the group’s popularity swelled to superstardom in the UK, a concerted effort was made by Arista Records (the record company that evolved from Bell) to launch the Rollers in North America. New Arista head Clive Davis was instrumental in grooming and overseeing the project. His work paid off, as in late 1975, the Rollers reached #1 on the US Billboard Hot 100 with “Saturday Night”, the song that had missed the UK chart completely two years earlier. The Rollers gave the track their American debut via a satellite-link performance on Saturday Night Live with Howard Cosell. In Canada, it fared equally well, hitting #1 on the RPM national singles chart on 10 January 1976. The Bay City Rollers album (North American release only) hit #1 in the same chart on February 7.

A second North American hit came with “Money Honey”, written by Faulkner and Wood, which hit #9 in the US. In Canada, it fared better, following its predecessor to the top and giving them their second #1 in the RPM national singles chart on 13 March 1976. The North America/Japan release album Rock n’ Roll Love Letter jumped from #25 to the top position in a single week in Canada, deposing their own Bay City Rollers album at Number #1 on the national chart on 27 March 1976,[6] but only managed to achieve the #31 spot on the U.S. Billboard chart.

By early 1976, the strain of success began to take it's toll on bass guitarist Alan Longmuir. He felt he was too old to be in a young pop group that attracted young girl fans. (the fans were labelled 'teenyboppers for some reason!') He felt uncomfortable so decided to leave the group. At least that's what the public was told back then anyway. However, in Les Mckeown's autobiography 'Shang-a-lang' he says that Alan actually got the boot because he wouldn't allow Tam to control him and refused to give up his girlfriend! 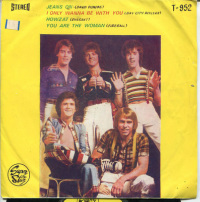 He was replaced for seven months by 17-year-old Ian Mitchell – the first band member born outside Edinburgh, Scotland. (He was from Northern Ireland.  With Mitchell, the group released an album titled Dedication, and hit the charts with a cover version of the Dusty Springfield song “I Only Want to Be with You”, which reached US #12, as well as “Yesterday’s Hero” (featuring live material from a 1976 personal appearance in Toronto’s Nathan Phillips Square), and “Dedication”.

As the Rollers’ popularity waned, the shuffling of personnel continued: Mitchell quit the band, telling Rolling Stone that “I’m getting out before I stick my head in a gas oven.” He was replaced by Pat McGlynn, who joined the band with the forlorn wish that “I just hope I can cope.” McGlynn lasted only a few months before quitting in turn, complaining that the other Rollers had treated him like a servant. Further struggles around the band involved the direction of their sound, as the members wished to pursue more sophisticated styles. They settled on David Bowie’s producer, Harry Maslin, and in August 1977 released It’s a Game as a four-piece group, comprising McKeown, Wood, Faulkner and Derek Longmuir. The It’s a Game tour produced the live album Rollerworld: Live at the Budokan 1977, recorded in 1977 at Japan’s Budokan Hall, but unreleased until 2001.

On the disc, they covered an unsuccessful 1973 single by String Driven Thing, “It’s a Game” to give them their final UK Top 20 hit (#16 in May 1977), but “You Made Me Believe in Magic” could only make #34 in July. Oddly enough, this single provided them their highest-charting German hit, reaching #4 in the same year. “You Made Me Believe in Magic” reached #10 in the US, but this would be their final major success there too.
In 1978, Alan Longmuir reunited with the band for the recording of Strangers in the Wind. The release of this LP was timed to coincide with the debut of the Rollers’ US Saturday morning television show The Kroft Superstar Hour, later renamed The Bay City Rollers Show, on the NBC network. The show was a poor match for the band. And considering the show was a children's show aimed at the pre-teen market, it was very unwise to get involved in it at all. Their time in the teen idol spotlight was slipping away and their music had matured and become more sophisticated compared to the bubblegum hits they had released in 1975-1976. The show and album were both failures.

McKeown made the decision to leave for a solo career, after a concert tour in Japan.

At the end of 1978, the band had split with McKeown, fired Tam Paton shortly after and decided to continue in a more new-wave, rock-oriented sound. Their name was now simply 'The Rollers'. South African-born Duncan Faure joined the band as new lead vocalist, guitarist and songwriter. With Faure, the line-up produced three albums: Elevator (1979), Voxx (1980), and Ricochet (1981). None of the releases sold well and they officially spilt up in late 1981. 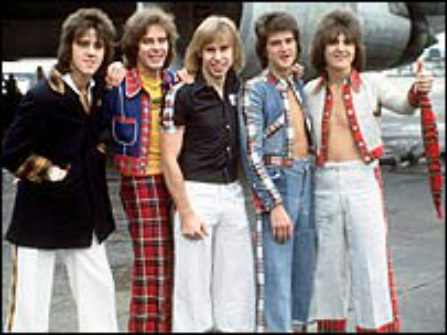 The classic (and the best) line up of The Bay City Rollers.